Q and A: How Could My Character Keep Blood In a Liquid State For Later Consumption?

Q: I have a killer who drinks the blood of his victims. If he wants to bleed out a victim and wind up with blood in his freezer that he can reheat in a Mr. Coffee, I assume he’ll need some sort of anticoagulant. Is that right? Would he have to use it immediately at the murder scene? What would the average person have access to that could serve this purpose, especially if he didn’t preplan his first kill. Better still, is there some way to reconstitute the blood after it coagulates? 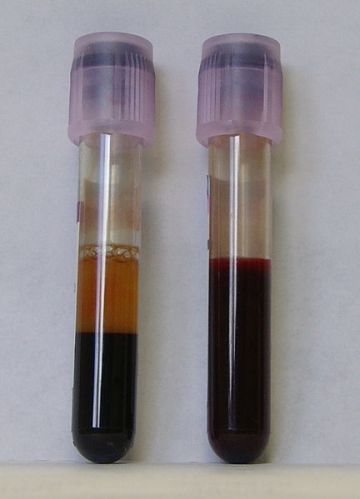 A: Actually there are several ways to accomplish this. If your killer has access to the victim for several days or weeks prior to the event, he could slip some Coumadin into his food daily for two or three weeks prior to the killing. Coumadin, or warfarin, is an oral anticoagulant that works mostly in the liver to prevent blood clotting. It takes a week or so to build up to levels that would keep the blood liquid.

That might be cumbersome for your story, so there is another choice. Heparin. Heparin should be given intravenously but it works immediately as an anticoagulant. Your killer could inject a large dose of heparin right before the killing. This would of course require that he have full control of the victim or at least convince the victim that the injection was harmless. Either way, if he gave 100,000 to 200,000 units of heparin intravenously the victim’s blood would be anti-coagulated within seconds and he could then bleed him and store the blood as a liquid for an extended period of time.

Lastly, as he drained the blood he could put it into a container that contained EDTA. This is what is used in the blood vials when blood is drawn that needs to be anti-coagulated for certain tests. It’s a white powder that is available from pharmaceutical supply houses. Mixing some of this with the blood would prevent it from coagulating so it could be stored as a liquid.

As far a reconstituting it, once blood clots it immediately begins to separate into the reddish clot and the yellowish serum. Vigorous shaking or running it through a blender could remix the blood, resulting in a red liquid that he could then consume.

5 responses to “Q and A: How Could My Character Keep Blood In a Liquid State For Later Consumption?”