Give ITW for Christmas

Need a last minute Christmas present? Consider giving that writer in your family a gift that will keep on giving for years—-more tools in their writer’s toolbox.

Maybe a trip to NY for ThrillerFest/CraftFest/Master CraftFest. Or perhaps sign them up for ITW’s Online Thriller School.

BIO: Born and raised in Southwest Oklahoma, John Mullins graduated from High School at 17 and was in the U.S. Army the next day.  In short order he was trained as an Infantryman, and then joined the 101st Airborne Division, where he became a paratrooper.

He then volunteered for a little-known (at that time) outfit called Special Forces, was trained as a medic, then joined an “A” Team and was deployed with that team to a fighting camp in the Republic of South Vietnam.  After his return to the U.S. he went to French Language School, then Officer Candidate School, after which he was commissioned as a Second Lieutenant.  Subsequently he went to Ranger School and was then reassigned to Special Forces, returning to Vietnam with another “A” Team.  During a battle in the Central Highlands he was recommended for and received a Silver Star for valor and a Purple Heart for wounds.

Back in the U.S. he was assigned to the U.S. Army Infantry School as the original instructor for a system of reactive shooting techniques.  In 1968 he volunteered to return to Vietnam and served a tour with Studies and Observations Group (SOG), at one and the same time the most classified and most hazardous unit ever to serve in that war.  During this tour he received his second Silver Star for valor.  He then extended his tour to be the only U.S. serviceperson in the much-maligned but highly effective Phoenix Program, neutralizing the Viet Cong infrastructure in the top two provinces in South Vietnam.

For the next ten years he served as a Special Forces officer in Europe and the U.S., participating in training and operational assignments in Europe, the Middle East, Central and South America, and Asia.

After retirement from the military he worked, sometimes as an employee, other times as a contractor, for a variety of U.S. Government agencies.  Some of the highlights of that period include:

Training a special battalion of the Saudi Arabian National Guard. This battalion later distinguished itself in the Battle of Khafji during the first gulf war.

Providing protection for judges in Colombia during the height of cartel violence as a part of the U.S. Department of Justice’ International Criminal Training and Assistance Program.

Trained aviation security personnel from 83 countries as a part of the U.S. Department of State’s AntiTerrorism Assistance Program.

Ran Personal Protection teams for High-Risk individuals and families in the U.S. and abroad.

Invented and patented a Non-Toxic Frangible ammunition now being used by police agencies throughout the U.S.

Still serve as a consultant to the firearms and ammunition industry, including a major Swiss-based multinational company.

Recently re-wrote and modernized the Aviation Security Plans for the Republic of Ghana.

Posted by D.P. Lyle, MD on December 17, 2015 in Crime and Science Radio, Uncategorized

My friend Peter James is a great writer and anyone who has read his work knows this is true. If you haven’t had the pleasure, do so now. He might not be James Bond but he’s close. As is his wonderful character Roy Grace. His latest, YOU ARE DEAD, is a runaway success and he dropped by to chat about it and other writerly things.

Tell us about YOU ARE DEAD–the eleventh novel in the Detective Superintendent Roy Grace series. Does it pick up exactly where WANT YOU DEAD left off?

Sure! You Are Dead is my 11th Roy Grace novel. A young Brighton woman arriving home from work phones her boyfriend, to tell him she has just driven into their underground car park and can see a man acting strangely. Her boyfriend tells her to drive straight back out but before he finishes speaking she screams and the phone goes dead. He calls the police and rushes home himself – and she has vanished.

That same afternoon, workmen digging up a park in another part of the city, unearth the remains of a woman in her early twenties, who has been dead for thirty years. At first, to Roy Grace and his team, these two events seem totally unconnected. But then another young woman in Brighton goes missing – and yet another body from the past surfaces. Detective Superintendent Roy Grace has the chilling realization that there is a connection between the past and the present. Does Brighton have its first serial killer in over eighty years? A monster who has resurfaced after lying low for three decades? 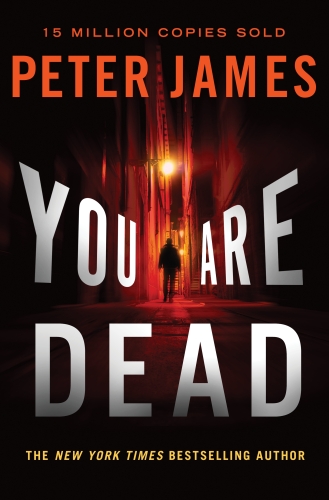 Where do you draw inspiration from?

Aside from my imagination and own experiences, I regularly spend time out with the police and gain a huge amount of inspiration from things I see over and hear over that time.  Today I spend an average one day a week with the Police, either in a patrol car, or an office, or at a crime scene, or on a raid, or with their Intelligence or forensic or search units – there are so many different parts to their work.  I even have my own police car in Brighton!  My publishers donated it to Sussex Police and it drives around with my name all over it. I often get inspiration from things the police tell me, or cases that officers are involved with.  I believe to portray them credibly I need to be to a considerable extent involved in their lives, not just at work but when they are off duty.   Many police officers only socialize with others in the police too – they feel more comfortable that way.  They don’t have to worry about giving away secrets to a prying member of the public, or saying something offensive that might come back to bite them.  But I also think one of the best resources for my inspiration is in shops all over every town and city in the land, and refreshed daily – newspapers!  They contain so much of human life, and so many true crime stories.  In particular, I often think that local provincial papers contain more in-depth coverage and lurid details than the nationals.

Did you balance reading and writing? Have you read anything good lately?

I try to ensure that whatever I’m doing I leave myself time to write 1000 words 6 days a week. I have offices in my Sussex and Notting Hill homes, but I can write anywhere. Thanks to laptops, my office has long ceased to be a concrete space and I can write on the move. I actually write really well on airplanes, in the back of a car and in hotel rooms. But my favourite writing time is 6 – 9:30 in the evening. I got used to that when I was working full time in film and TV, and made this my ‘me’ time. I have a stiff drink – often a vodka martini, with four olives, put on music and get in a zone. I really love this time of the day.

I recently really enjoyed I LET YOU GO by Claire Macintosh. I was first sent it as a proof, asking for a quote, and I was utterly gripped.  It is wonderfully written, with credible and interesting characters, and has one of the most astonishing twists I’ve ever read, turning the story completely on hits head halfway through.  It was one of those rare books I put down thinking, “Gosh, wish I’d written this!

Also recently I have been reading Patricia Highsmith, a very recent discovery for me. I have seen Strangers On A Train and The Talented Mr Ripley, but had never read her novels.  She is such a brilliant writer.

Who is a character you wished you created?

Are you a fan of crime television shows? If so, which ones?

I guess my favourite one of recent is Breaking Bad – if my time ever allows me to finish it! I have always loved them going back into my youth – I have a particular fondness for American shows. The first one I can remember being addicted to was called ‘Highway Patrol’ with Broderick Crawford.

Surgery in Space: A Matter of Timing

Looking into the future, what would happen if an astronaut on Mars or a colonist on the Moon needed surgery? Who would do it? It’s not like a surgeon could be dispatched  to Mars on an emergent basis. Nor would it be likely one would be part of the small and carefully selected crew. So how can this problem be solved?

Maybe have a marginally trained person perform the needed procedure guided by a surgeon on the ground. Or a robotic device could be employed, while the surgeon sat at console on Earth. This is how most so-called robotic procedures are done now—-the patient is on the table while the surgeon sits at a console several feet away. 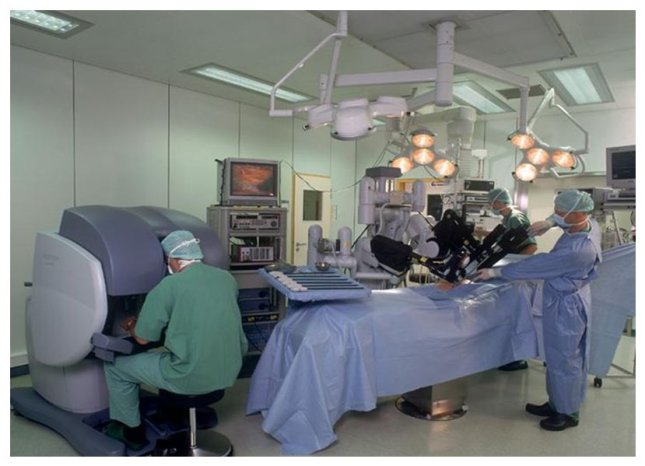 The key words here are “several feet away.”

In an Earth-controlled surrogate-surgeon or robotic procedure, the main problem the Mars-exploring patient and the Earth-bound surgeon would face is the time lag for the instructional signals to travel back and forth. This would be a significant and make surgery extremely difficult if not impossible. Depending on where each planet is in its own orbit, the two planets are separated by 34 million to 250 million miles. And the time required for a signal to travel one way varies accordingly—-between 4 and 24 minutes. Meanwhile, incisions are being made, blood if flowing, and the surgeon is twiddling his thumbs waiting to see the results of his most recent action. Not a pretty or effective situation.

So what about a completely self-contained, self-controlled robotic device? One that operated—so to speak—on its own? That would be cool. And research is moving that way. 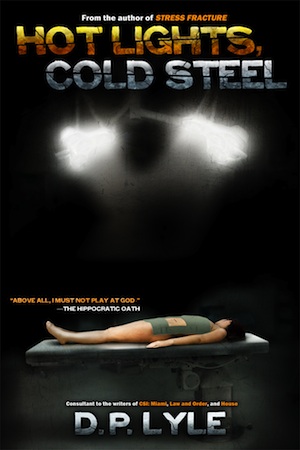 BIO: Kathy Reichs’s first novel Déjà Dead catapulted her to fame when it became a New York Times bestseller and won the 1997 Ellis Award for Best First Novel. Her other Temperance Brennan novels include Death du Jour, Deadly Décisions, Fatal Voyage, Grave Secrets, Bare Bones, Monday Mourning, Cross Bones, Break No Bones, Bones to Ashes, Devil Bones, 206 Bones, Spider Bones, Flash and Bones, Bones Are Forever, and Bones of the Lost, and the Temperance Brennan e-short, Bones In Her Pocket. In addition, Kathy co-authors the Virals young adult series with her son, Brendan Reichs. The best-selling titles are: Virals, Seizure, Code, and Exposure, along with two Virals e-novellas, Shift and Swipe. These books follow the adventures of Temperance Brennan’s great niece, Tory Brennan.  Dr. Reichs is also a producer of the hit Fox TV series, Bones, which is based on her work and her novels.

From teaching FBI agents how to detect and recover human remains, to separating and identifying commingled body parts in her Montreal lab, as a forensic anthropologist Kathy Reichs has brought her own dramatic work experience to her mesmerizing forensic thrillers. For years she consulted to the Office of the Chief Medical Examiner in North Carolina, and continues to do so for the Laboratoire de Sciences Judiciaires et de Médecine Légale for the province of Québec. Dr. Reichs has travelled to Rwanda to testify at the UN Tribunal on Genocide, and helped exhume a mass grave in Guatemala. As part of her work at JPAC (Formerly CILHI) she aided in the identification of war dead from World War II, Korea, and Southeast Asia. Dr. Reichs also assisted with identifying remains found at ground zero of the World Trade Center following the 9/11 terrorist attacks.

Dr. Reichs is a native of Chicago, where she received her Ph.D. at Northwestern. She now divides her time between Charlotte, NC and Montreal, Québec. 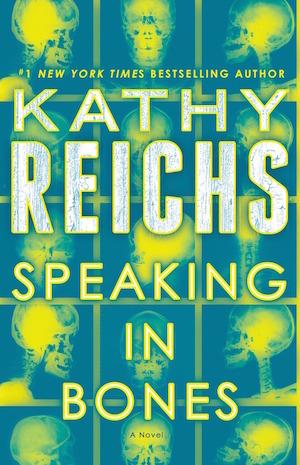