Criminal Mischief: The Art and Science of Crime Fiction: Episode 11: Civil War “Limb Pit” and the History of Infectious Diseases 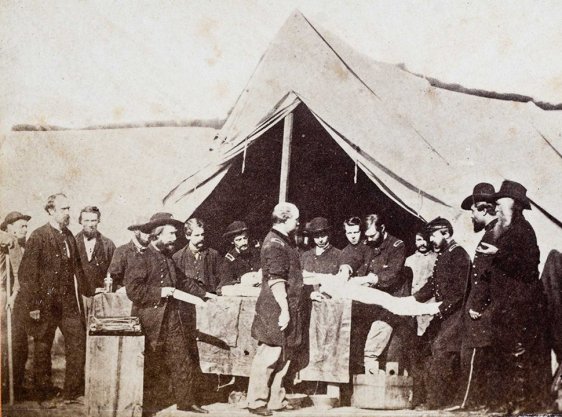 Criminal Mischief: The Art and Science of Crime Fiction Podcast:https://soundcloud.com/authorsontheair/limb-pits-and-germ-theory

Here in the 21st century we know a great deal about infectious diseases. We can treat bacterial infections with antibiotics, immunize people against numerous diseases, understand how viruses work, and have a huge fund of knowledge about surgical sterility and disease prevention. This was not always the case. In fact, in the history of medicine, all of this is fairly new.

During the 14th century, Europeans didn’t understand infectious diseases so when the Bubonic Plague, also known as the Black Death, struck, they had no understanding of what was going on, how to prevent it, and, more importantly, how to treat it. They were at the mercy of a bacterium that currently is easily treatable. The Black Death killed between a third and a half of the population of Europe and dramatically altered the trajectory of world history. 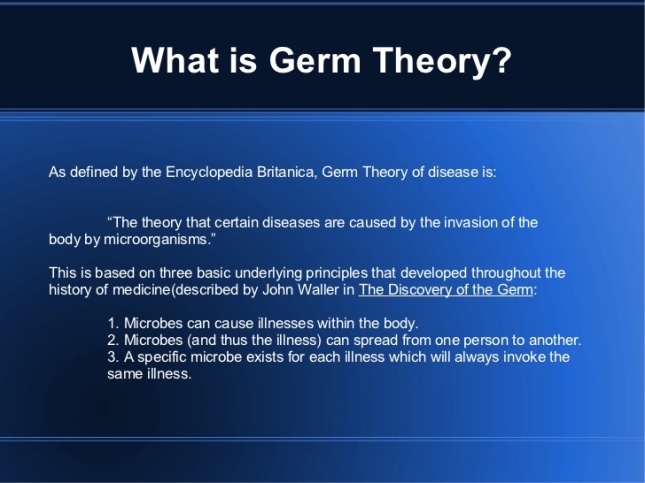 The transition from ignorance to enlightenment concerning infectious processes was a long process and involved some of the giants of medicine. Names like Ignaz Semmelweis, John Snow, Louis Pasteur, Joseph Lister, and Robert Koch. The observations of these famous scientists were ultimately distilled into Robert Koch’s famous Koch’s Postulates, which proved the Germ Theory of disease. These postulates served as the foundation for our understanding of infectious diseases, and still do today. Simply put they say:

2-The suspected organism must be isolated from the diseased individual and grown in culture.

3-The cultured organism must then be given to a healthy individual and reproduce the disease.

4-The organism must then be isolated from this newly diseased individual and identified.

Each of these steps is necessary to show that a particular organism causes a particular disease and is transmissible from one person to another. Basically, this is how infectious diseases work.

Unfortunately, Koch’s Postulates were not put forward until the 1880s, a couple of decades after the Civil War.

During the Civil War, almost any battlefield injury could lead to death, most often from a secondary wound infection. A gunshot to the leg, or arm, or really anywhere could become infected quite easily and this infection could spread through the entire body causing sepsis, which would ultimately lead to death. More soldiers died from infection than from their injuries. Surgeons at that time understood the danger of infections, even though they didn’t know what caused it, and had no clue how to prevent or treat them. This meant that serious limb injuries were treated with amputation. Get rid of the injured limb and hopefully lessen the possibility of a secondary infection. Of course, post-surgical infections were also common and also lead to death.

Not only were sterile techniques and antibiotics unavailable at that time, but also any form of anesthesia was not to be found on most battlefields. Ether was around, having been first demonstrated by William T. G. Morton in 1846, but it’s use and availability wasn’t widespread. This means that a battlefield surgeon’s best skill was speed. Sort of the surgical equivalent of “ripping off the Band-Aid.” Any surgery was agony and the quicker it was done, and the sooner it was over, the better for the victim. And the amputated limbs piled up.

It seems that Virginia’s Manassas National Battlefield Park has yielded what can only be called a “limb pit.” It is a place where surgeons deposited removed limbs. This discovery underlines the state of surgical treatment and its brutal nature during the 1860s.

Criminal Mischief: The Art and Science of Crime Fiction: Episode #10: Rattlesnakes and Murder

People commit murder for a host of reasons. Things like financial gain, revenge, lust, anger, to cover another crime, and many other motives. It seems that these motives can even include a dispute with the dude who parked his RV next to yours.

All sorts of weapons are used for committing murder. Guns, knives, poisons, explosives, ligatures, drownings, and gentle pushes off buildings or cliffs. Oh, don’t forget rattlesnakes. This seems to be what Mr. Sauter decided to employ. Simply slipping the reptile into his neighbors RV might not work since rattlesnakes make that buzzing noise to warn people away. So, wouldn’t it be best to simply remove the rattle. And I guess the best way for that is to bite it off.

You simply can’t make this stuff up.

But snakebites are not always the result of some criminal activity. In fact, they rarely are. Most snakebites occur accidentally. Hunters and hikers know this all too well. As a kid growing up in Alabama, and stomping around in the woods on a daily basis, I knew snakes well. I knew which ones to avoid and which ones were harmless. A black racer was scary and fast, but harmless. Stumble on a rattlesnake or a copperhead and that’s a different story. And until you’ve seen a water moccasin, or as we call them cottonmouth, you haven’t seen an evil looking serpent. These guys are thick, dark, and prehistoric looking. And very dangerous. Yes, they can bite you in the water. So before you jump into that swimming hole deep in the woods, you better make some noise and shake up the water runoff any cottonmouth might be around.

But other people are bitten while they are handling snakes. I don’t mean just biologist or herpetologist, those that study these creatures, but also those who use them in religious ceremonies. You might think that snake handling is a thing of the past and something that is only found in the South, but that’s not true. There are still several snake handling churches from coast-to-coast. Even though in many locations snake owning and handling is not legal, the laws get shaky when it’s under the guise of religion.

Their justifications come from Mark 16:17-18

“And these signs shall follow them that believe; In my name shall they cast out devils; they shall speak with new tongues; They shall take up serpents; and if they drink any deadly thing, it shall not hurt them; they shall lay hands on the sick, and they shall recover.”

Snake handling in churches is often traced back to 1910 when George Went Hensley began incorporating them into his services at his Church of God with Signs Following. Many others have followed in his footsteps. And many have been bitten such as John Wayne “Punkin” Brown and Jamie Coots, whose son Cody was also bitten while preaching but saved when friends defied the church dictates and got him medical treatment.

For the most part, medical treatment is not offered in the circumstances because it is felt that it’s up to the Lord whether the preacher survives or not. After all, it is religion and the Lord can save you then what’s the point? Not to mention, that many of these groups feel that sipping strychnine is also good for you and will prevent you from dying if you are bitten by a snake. Yeah, that makes good medical sense. Add another poison to the poison authority in your system.

I use much of this in my third Samantha Cody book, Original Sin. One of the bad guys in this story is a snake-handling preacher. During my research for this book, I stumbled across a wonderful book titled Salvation on Sand Mountain. Sand Mountain is maybe 30 or 40 miles from where I grew up so obviously the title intrigued me. Once I got the book and began reading it I discovered it was wonderfully written and then discovered that it was nominated for a National Book Award. It is written by Dennis Covington and is the story of Glenn Summerford, a snake-handling preacher who attempted to kill his wife with a snake. 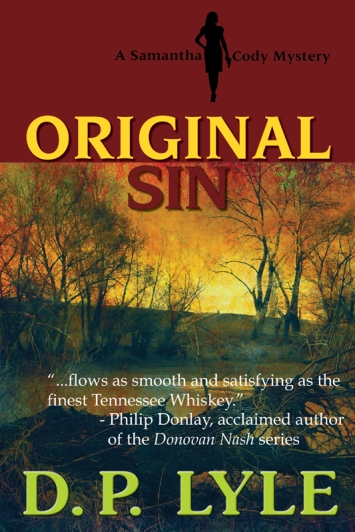 “I knew you’d come back to us,” John Scully said as Lucy and Sam walked into the church. He and Miriam were standing near the pulpit.

“Back to the church.”

“That implies I was ever here.”

“You were,” Miriam said. “From the moment you breathed your first breath.”

Scully smiled. “You have always been a part of us. Martha and your parents saw to that.”

Lucy glanced toward Sam. “Am I missing something here?”

“Doesn’t make sense to me either,” Sam said.

“You were baptized into the church when you were only days old.”

“No offense, but I don’t remember that. And no one ever bothered to tell me.”

“But deep inside you know it’s true,” Scully said.

Felicia walked in, carrying a wooden box. She placed it on a table to Scully’s left. The unmistakable buzzing of snakes rose from the box. Scully raised the lid and casually removed a fat rattlesnake. Its buzzing now adopted an angry tone.

Lucy and Sam each took a step back.

“I’m more worried about me and Lucy,” Sam said.

“He’s been bitten a dozen times,” Miriam said. “His faith protects him.”

“That and a little strychnine,” Scully said.

“Strychnine?” Lucy asked. Her attention never drifted from the snake that now waved its head around as if looking for a suitable target. She felt perspiration gather along her back as her heart rate clicked up a notch. God, she hated snakes.

“I must have missed that day in med school,” Lucy said.

Miriam offered a maternal smile. “Can’t learn everything from man’s books. Only from the word of the Lord.”

The snake coiled around Scully’s arm, head raised. Lucy felt as if it was watching her. She took another half step back, Actually, she wanted to run out the door, but fought the impulse.

“Why snakes?” Sam asked. “What do they have to do with Jesus?”

Lucy knew Sam was playing cop now. Ty and Bump had told them about Scully’s insane beliefs. And Sam had told her that Gladys Johnston had said the same thing. Sam was merely asking questions she already knew the answer to. Seeing if Scully changed his story in any way.

Now it was Scully’s turn to offer a paternal smile. It faded and his gaze seemed to glaze over. He spoke.

And he said unto them, Go ye into all the world, and preach the gospel to every creature.

And these signs shall follow them that believe; In my name shall they cast out devils; they shall speak with new tongues;

They shall take up serpents; and if they drink any deadly thing, it shall not hurt them; they shall lay hands on the sick, and they shall recover.

So then after the Lord had spoken unto them, he was received up into heaven, and sat on the right hand of God.

And they went forth, and preached everywhere, the Lord working with them, and confirming the word with signs following. Amen.

The quote Sam had shown her. The one Scully had written on the back of a menu.

“I’m afraid I don’t understand,” Sam said. “This is the scripture that tells you to play with snakes?”

Scully gaze hardened. “It’s not play. But you wouldn’t understand.”