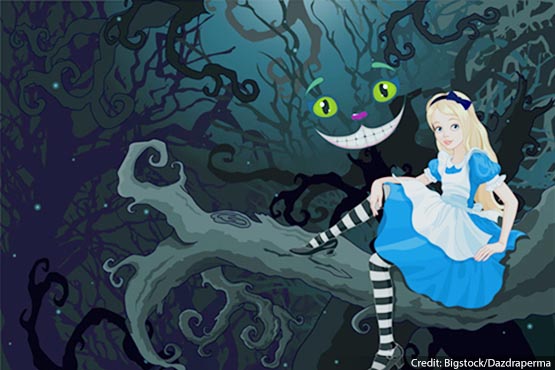 And the ones that mother gives you, don’t do anything at all

And then there was this excellent question from my friend and wonderful writer Frankie Bailey that was published in SUSPENSE MAGAZINE as part of my recurring Forensic Files column:

What Drugs Might Cause Side Effects in My Character With Alice in Wonderland Syndrome?

Q: I have a question about Alice in Wonderland Syndrome (AIWS) My character is in his mid-30s. From what I’ve gathered from reading about this syndrome, it is fairly common with children and with migraine sufferers and it is controllable. However, I want my character to have side-effects. In other words, even though the AIWS and his migraines are under control, he is increasingly erratic. Insomnia, impotence, and irritability would all be a bonus. Could he be dosing himself with some type of herb that he doesn’t realize would have these side-effects when combined with the medication prescribed for AIWS. Or is there a medication for AIWS that might cause these kind of side-effects but be subtle enough in the beginning that the person becomes mentally unstable before he realizes something is wrong?

A: Alice in Wonderland Syndrome is also known as Todd’s Syndrome. It is a neurologic condition that leads to disorientation and visual and size perception disturbances (micropsia and macropsia). This means that their perception of size and distance is distorted. Much like Alice after she descended into the rabbit hole and consumed the food and drink she was offered.

AIWS is associated with migraines, tumors, and some psychoactive drugs. It is treated in a similar fashion to standard migraines with various combinations of anticonvulsants, antidepressants, beta blockers, and calcium channel blockers. Both anticonvulsants (Dilantin, the benzodiazepines such as Valium and Xanax, and others) and antidepressants (the SSRIs like Lexpro and Prozac, the MAOIs like Marplan and Nardil,, and the tricyclic antidepressants like Elavil and Tofranil, and others) have significant psychological side effects. Side effects such as insomnia, irritability, impotence, confusion, disorientation, delusions, hallucinations, and bizarre behaviors of all types–some aggressive and others depressive. Beta blockers can cause fatigue, sleepiness, and impotence. The calcium channel blockers in general have fewer side effects at least on a psychiatric level.

As for herbs almost anything that would cause psychiatric affects could have detrimental outcomes in your character. Cannabis, mushrooms, LSD, ecstasy, and other hallucinogens could easily make his symptoms worse and his behavior unpredictable.

Your sufferer could easily be placed on one of the anticonvulsants, one of the antidepressants, or a combination of two of these drugs and develop almost any of the above side effects, in any degree, and in any combination that you want. This should give you a great deal to work with.

What is Alice in Wonderland (AIWS) Syndrome?

A neuropsychiatric syndrome—also know as Todd’s Syndrome after Dr. John Todd, the physician who first described it in 1955—in which perceptions are distorted and visual hallucinations can occur. Often objects take an odd size and spatial characteristics—-just as Alice experienced. They can appear unusually small (micropsia), large (macropsia, close (pelopsia, or far (teleopsia).

It can be caused by many things including hallucinogenic drugs, seizures, migraines, strokes, brain injuries, fevers, infections, psychiatric medications, and tumors.

Lewis Carroll was known to suffer from migraines. His own diary revealed he had visited William Bowman, an ophthalmologist, about the visual manifestations he regularly had when his migraines flared. So it just might be that he himself experienced AIWS and took his experiences to create Alice.

What’s the Deal with Typhus?

Ever heard of Typhus? Probably in history class, or something similar. It reared its head many times during the Middle Ages and helped take down Napolean’s Grand Army in 1812. Many believe that as much as one-third of his army succumbed to the disease. It pops up here and there from time to time. Like now. Seems LA has a Typhus problem and it’s centered around City Hall.

Typhus is what we call a Rickettsial disease since it is caused by a bacterium known as Rickettsia typhi—-at least the form that comes from fleas is. A Rickettsial disease you’ve likely heard of is Rocky Mountain Spotted Fever (RMSF). There are several types of Typhus, each caused by a different bacterium and spread by a different vector. Scrub Typhus is carried by mites, Endemic Typhus by lice, and the one that’s affecting LA is Murine Typhus, which is carried to humans by fleas from infected rats. 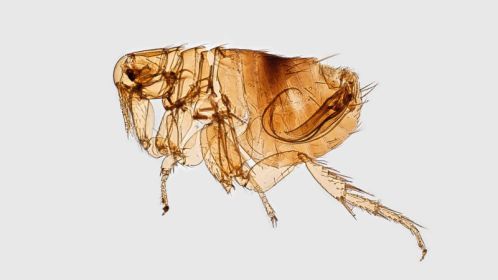 When an infected vector bites a human, the bacterium enters the body and spreads. A week or two later the victim will develop fever, chills, and headaches. Sometimes GI symptoms such as nausea, vomiting, and abdominal pain occur. Not unlike a bad flu. Then, a few days later, the rash appears.

If untreated, the disease can cause severe damage to the kidneys, liver, lungs, heart, brain, and can lead to death. But once diagnosed, the treatment is rather easy. The antibiotic doxycycline, sometimes ciprofloxacin, kills the rickettsial bacterium quickly and efficiently.

Right now, LA is treating the infected and trying to figure the best way to clear the rodents and fleas from City Hall. It’ll be a big job.

Fentanyl is a synthetic opioid that is as much as 300 times more powerful than morphine sulfate. It can be injected, ingested, inhaled, and will even penetrate the skin.

It is used in medical situations frequently for pain management, sedation, and for twilight-anesthesia for things such as colonoscopies.

Fentanyl is the number one cause of drug ODs.

Americans have a slightly higher than 1% chance of ultimately dying of an opioid overdose. That’s better than one in 100 people. In fact, 60 people die every day from opioid ODs. That translates to over 22,000 per year. In fact, US life expectancy dropped slightly between 2016 and 2017 due to opioid overdoses.

Thirteen people suffered a mass OD at a party in Chico, Ca in January 2019.

It is often added to other drugs such as heroin to “boost” the heroine effect. Unfortunately, Fentanyl is much more powerful than heroin and when the two are mixed it becomes a deadly combination. It’s also often added to meth and cocaine.

How powerful is fentanyl? A single tablespoon of it could kill as many as 500 people; 120 pounds as many as 25 million people. A recent bust, the largest in US history, recovered over 250 pounds of Fentanyl secreted in a truck crossing the US-Mexico border-—enough to kill 50 million people.

When cops arrest people who possess or are transporting fentanyl they must take precautions not to touch or inhale the product as it could prove fatal. The opioid crises is the reason many cops carry Narcan (Naloxone) with them as either an injection or a nasal spray. It reverses the effects of narcotics very quickly.

The “Dark Web” is a source for many things that can’t be purchased or the open market. Weapons, hitmen, and drugs. But even many of these dealers won’t deal Fentanyl.

Could fentanyl be used as a weapon of terror? Absolutely. A fentanyl aerosol sprayed into a room of people could easily kill everyone present in a matter of minutes. It is a powerful narcotic that acts very quickly and depresses respiration so that people die from asphyxia.

In 2002 a group of around 50 Chechen terrorists who took 850 people hostage in a Moscow theater. Many of the attackers were strapped with explosive vests. The standoff lasted 4 days until the Russians pumped Fentanyl-maybe carfentanil or remifentanil—through the vents and took everyone down. All the terrorists were killed but unfortunately, over 200 of the hostages died before medical help could reach them.

Carfentanil—-Been around since 1974 but just now entering the world of drug abuse. Used in darts as a large animal tranquilizer. AN analog of fentanyl but is 100X stronger.