RSS
← Guest Blogger: Jodie Renner: Big-Picture Problems to Look for Before You Pitch or Publish Your Thriller
Breathprints? As Good as Fingerprints? →

Q and A: Can My 1920’s Linguist Effect A Permanent Change in Another Character’s Voice?

Q: In my story, set in a time analogous to the 1920s, an errant linguist captures a young male prostitute. She hopes to recreate him into her lost daughter, which is part of a longer investigation to discover how her daughter died at her finishing school. Part of the prostitute’s transformation involves a vocal shift upward into a more feminine range.

My question: Supposing the linguist is understandably obsessive, the prostitute is helpless, and there are some generous funds available to fuel her undertaking, how long would it take for the vocal feminization techniques to have a convincing (and consistent) effect? What other aspects would their therapy focus on–semantics, syntax, word choice? Should the prostitute regain his freedom after about nine months of speaking in this artificial way, would it be difficult for him to resume speaking in his normal range?

A: The technique you describe is simply a different form of speech pattern where the individual is trained to talk in a certain way and at a different timbre. This is the same thing that actors do when practicing for a role that requires a certain accent or speech pattern. This is learned behavior and does not change the individual’s natural speaking voice. He could at any time fall back into his normal voice though the longer he spoke in the new voice the more difficulty he might have in unlearning this behavior. The point is that this learned behavior doesn’t cause a permanent change in his voice because he must always use the affected voice and be conscious, at least on some level, of doing so. 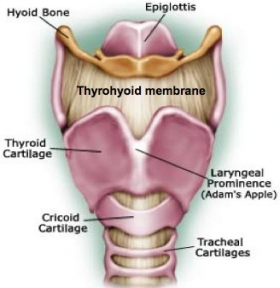 But there are surgical procedures that alter the timbre of the person’s voice. In the situation you describe it would be called vocal feminization. These procedures often involve suturing the thyroid cartilage (Adams Apple) and the cricoid cartilage closer together. This would cause a more permanent change. I don’t think these were done in the 1920s so you’re left with the linguist teaching the young man a type of affected speech. This training would include syntax, word choice, rate and pattern of speech, as well as things like facial expressions, body language, and hand gestures.

← Guest Blogger: Jodie Renner: Big-Picture Problems to Look for Before You Pitch or Publish Your Thriller
Breathprints? As Good as Fingerprints? →