Theresa Schwegel was born and raised in Chicago where she received her Bachelors from Loyola University. During her undergraduate studies, she interned for an independent commercial production company, which sparked her interest in all things Hollywood. In 1998, she moved to Southern California and soon after pursued her Masters in Film/Screenwriting at Chapman University.

In 2002, under the guidance of her teacher and mentor Leonard Schrader, she began rewriting her thesis screenplay OFFICER DOWN as a novel. Three years later, OFFICER DOWN was published by St. Martin’s Minotaur and went on to win the 2005 Edgar Allan Poe Award for Best First Novel. PROBABLE CAUSE, her second book, was a New York Times’ Editor’s Choice in January 2007. PERSON OF INTEREST, her third novel, was a hit with Janet Maslin at the New York Times and a Publisher’s Weekly Top 10 mystery of 2007. In 2008, Theresa accepted the Twenty-first Century Award from the Chicago Public Library Foundation in recognition for an emerging artist with ties to Chicago. 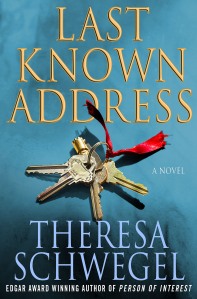 DPL: Your fiction is Chicago–the good, the bad, and the ugly. I know you live in the city but how do you go about researching all the great locations and neighborhoods you include in your stories?

TS: You also know I didn’t always live in the city! When I lived in Southern California, my trips to Chicago for the holidays always included at least one day of driving to places I’d never seen or on an architecture or neighborhood tour. I took photos and notes. Often, there would be at least one photo that really inspired me—for PERSON OF INTEREST, it was a shot of the back of a bunch of shops in Little Chinatown. I wrote the whole third act based on that photo.

Now that I’m back, I have to be careful or I’m over-stimulated—instead of working from memory I have the whole city right outside my windows. I have to give every draft at least one read to make sure I haven’t written a travelogue—especially since I wouldn’t encourage anyone to visit most of the places I write about…

DPL: You have cops down pat. What they do, what they say, how they think. How do you get it so gritty and so right?

TS: I’ve been asked this question before, and it wasn’t until a recent MAD MEN rerun that I realized where my knack for getting away with writing things I don’t necessarily know. In the episode I’m talking about, Don Draper’s pajama-dressed kids are sitting on the steps up to the bedrooms listening to their parents talk to dinner guests. I don’t remember what the Drapers were talking about, but I remember being that kid. I grew up an only child, and I spent a lot of time listening to grownups talk to each other. I don’t have any cops in my family and I haven’t spent nearly enough time with police to know how they ‘really’ talk, but I think I learned the important, subtle ways people communicate early on. We talk about things by talking around them. We develop shorthand between friends, coworkers, partners, and lovers. So, even when I’m writing cops, I think the key is to include those universals.

DPL: Any scary incidents during your research?

TS: There have been a number of adrenaline-releasers and those are usually right when things go from normal to nuts. The police I’ve been with have always considered my safety first and foremost, but I’ve been ordered to “get out of the crossfire,” to “stay in the car,” or to “wait here” (here being the side of the road while an officer drove off after a crook). I get it: when things go nuts, I’m another risk.

TS: That’s a tough one since most of my cops don’t play by the rules. After four books, it seems to me “procedure” is another word for “frustration.” Go figure: my favorite part of writing the Job is getting people to talk. I do have Sloane Pearson, the ex-homicide cop in Last Known Address, take a look at a body and tell another cop everything he missed—and that’s thanks to you, Dr. Lyle…

DPL: Your characters are definitely flawed. What, to you, is the most interesting character flaw you’ve ever given one of your characters and how did it effect the story?

TS: Vince Marchetti, the character in the story I’m working on now, is the most flawed and most interesting. Vince is an ex-homicide cop who was wounded on his last case by a killer who did a number on his face. He’d been a handsome guy, and a popular cop, and now his appearance and self-image are forever altered. I’ve never worked with a character who’s already knowingly hit rock-bottom. I’ve had trouble getting him to go to work.

TS: I do hang out with reporters and cops—so much so that they’ve become friends and rarely have anything juicy to tell. I read all kinds of stuff—from the Iliad to Modern Criminal Procedure to The Urantia Book, and I watch old movies. I read old newspapers, I talk to people. I overload on ideas and wait a while to see what sticks.

DPL: I know you just finished a tour for Last Know Address and I suspect you’re going to relax a bit, but then what’s next? Any conferences coming up? A new book in the works?

TS: Megan Abbott and I will be in Ann Arbor at Aunt Agatha’s on September 18, and I will also be at Bouchercon. Other than that, I’m cracking the whip on this new book—I’ve got a lot to learn, as usual, about why people do what they do. (Expect an email.)