When my husband and I were buying our second home, the bank we went to suggested an adjustable-rate mortgage. It had a nice rate, much lower than the 30-year fixed, which “couldn’t go up more than 2% per year,” and we “could lock it in at any time.” Period. For some reason I cannot recall, something made me check into this further. I was not good at math and certainly had no head for business, which had always bored me silly, but I did have a job as a secretary, which meant I had a phone, an office in which to use it all day long, and time. I wound up talking to four different people at three different banks before I got the situation clear. The rate that could be “locked in” was a completely different rate—not the adjustable rate at all, but the prime rate plus whatever the bank currently tacked on, a rate that was already higher than the 30-year fixed. When we met with the loan officer I reconfirmed this, and she said only, “But the adjustable rate might go down.” (As it turned out, it did, but still—I’m going to base thirty years of payments on “might”? I don’t think so.)

We passed on the ARM.

But questionable, risky and downright deceptive loaning practices went on, and my hometown, the setting of my books, suffered greatly. As a consumer activist explains to my detectives in Perish: 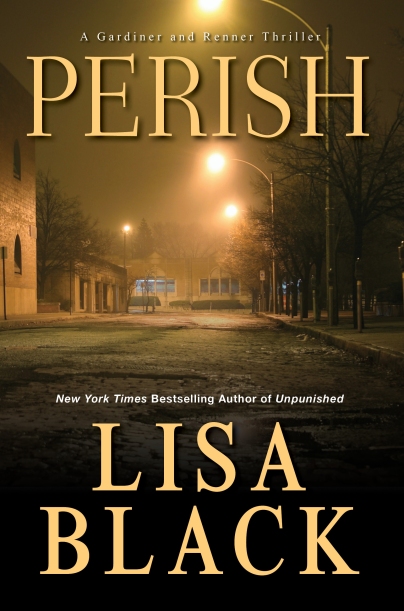 “Because mortgage originators like Sterling made loans to people they knew bloody well could never pay them. They set it up, collect their fees for doing a little paperwork, the investors get monthly payments, borrowers begin paying off their house, everybody’s happy.”

“So what’s the problem?”

“You know how that Greek guy said everything had to be in moderation?”

“When there’s money being made, moderation goes out the window. Even people with bad credit don’t want to pay high rates and, obviously, don’t have the money to pay high payments, so . . . creative math. Adjustable rates that you can ‘lock in’—except the rate you’re locking in is a completely different rate, prime plus whatever the bank feels like tacking on, so from day one this will already be higher than a thirty-year fixed. Low rates with balloon payments, which would work out fine if you know you’re going to win the lottery in three years. Interest-only payments, in which you aren’t paying a penny of the principal until the payment leaps up by one or two hundred percent in, say, seven years.”

“Exactly. Why make loans you know are going to fail? Because Wall Street compensation is based on that year’s performance. All the higher-ups get bonuses based on a percentage of profit—for CEOs this can be millions, double- and triple-digit millions. So when they will make more in one year than most people could make in several lifetimes, they don’t think in the long run.

“These firms—Ameriquest, Long-Term Capital, Long Beach Mortgage, and now Sterling—they don’t care if they falsify paperwork, whether they let their clients lie about their income, whether they flat out defraud their clients by pretending to sign them up for a fixed rate and then fake the papers to put them in an adjustable rate—because by the time their monthly payment suddenly triples and they default, the original firm is long out of it and the borrower is arguing with a company that never knew them and only knows what the original firm told it.” Ned went on, using both hands for emphasis. “People have to fight back. Cleveland and a bunch of other cities sued the lenders, but the mortgage banker’s association donated a few million to the state political parties and the lawsuits were thrown out. The Federal Reserve, the SEC, Congress threw up their hands and said there was nothing they could do. In 2008 the music finally stopped and some dancers collapsed, the government bailed out the rest, and our lawmakers were supposed to make laws so this couldn’t happen again.”

Jack’s legs twitched, aching to move, to do something.

“Except with caps on their compensation the investment banks and mortgage banks had plenty of money to keep up the kickbacks to the political parties, so the new laws wound up watered down into trickles.”

“Wait,” Jack said. “Are you protesting things that happened ten years ago, or things that are happening now?”

“The past is preface,” Swift said, but wiped away the smug tone when he saw Jack’s lack of appreciation for it. “The behavior I protested in 2008 slunk away for a while, laid low but never went away. Mortgage securities were a cash cow, and just because we slaughtered the cow doesn’t mean people lost their taste for milk. The big firms reined it in because no one, not even them, wants to go through that again, but little places like Joanna’s saw opportunity. Have you noticed commercials for instant credit and cold calls from barely legal sharks offering anyone who answers a no-collateral, pick-a-payment loan? They’re baaack—doing all the bad things they did before, but this time having the sense to get out before someone blows too hard on their house of cards.”

Lisa Black has spent over twenty years in forensic science, first at the coroner’s office in Cleveland Ohio and now as a certified latent print examiner and CSI at a Florida police dept. Her books have been translated into six languages, one reached the NYT Bestseller’s list and one has been optioned for film and a possible TV series.