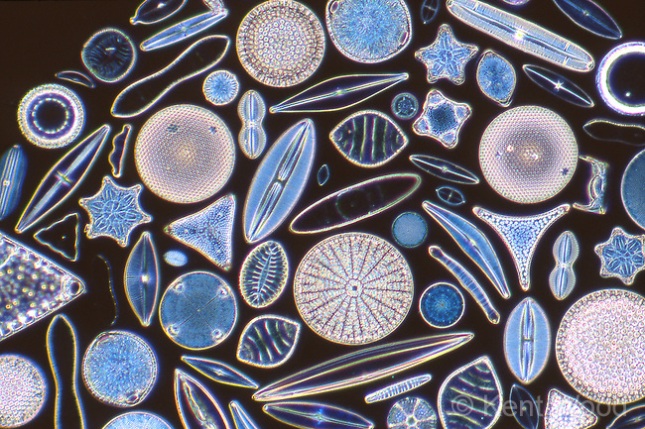 What are diatoms? How do they help the Medical Examiner determine that a death was from drowning?

Determining that someone has drowned is not as easy as it might seem. The finding of water in the lungs isn’t enough. Sure drowning victims most often have water-filled lungs but if a corpse is tossed into a body of water, the lungs will often passively fill as the water replaces the trapped air in the airways and lung tissue. However, if the ME finds inhaled debris such as plant and water-born insects, etc. deep in the lungs, this suggests that the victim was breathing at the time they entered the water and inhaled the debris-filled water. But this isn’t always found.

So a method for determining drowning is needed. Diatoms might help. Though controversial and definitely not universally accepted as a sign of drowning, this search for diatoms is an interesting forensic science technique. And this search is not in the lungs, but rather in the bone marrow.

The ME might also find clues to indicate that the victim was conscious before drowning by examination of the bone marrow. This might sound odd at first, but the key is in finding tiny creatures called diatoms within the marrow.

Diatoms are tiny single-celled organisms that scurry around in both salt and fresh water. They have silica in their cell walls and are very resistant to degradation. If the victim’s heart is still beating when he enters the water, any diatoms in the inhaled water will pass through the lungs, enter the bloodstream, and be pumped throughout the body, where they tend to collect in the bone marrow.

If a microscopic analysis of the marrow reveals diatoms, the victim must have been alive at the time of water entry. This technique may be useful in severely degraded or skeletal remains where no lungs or sinus tissues are available for examination. Unfortunately, diatom testing is not exactly that straightforward and is controversial. Some experts feel that diatoms are an inexact tool for determining if a drowning occurred. Some bodies of water contain no diatoms.

Also, they are found in air and soil and even on the clothing of the examiner. This makes contamination of the tested sample a possibility.