Q and A: What Happens When a Person Is Exposed to the Vacuum of Space? 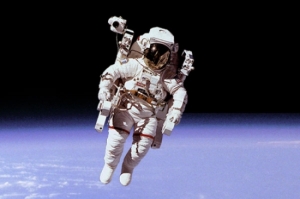 Q: What sort of damage does the human body suffer in the vacuum of space?  How long can one survive and what will happen to the person who does survive?  My scenario involves an astronaut whose faceplate blows out, but not before he depressurizes his suit sufficiently to prevent immediate death.

A: First of all the victim would not explode as was the case in the movies such as Total Recall. But some very bad things do happen internally and they happen very quickly. Whether he depressurizes somewhat beforehand or not, his survival once he reached zero pressure (vacuum) would likely be measured in seconds.

Space decompression sickness is similar to that of a scuba diver that rises too rapidly after a prolonged exposure to the pressures of the deep. In this case the diver is going from excess pressure to normal pressure. In space the victim goes from normal pressure to zero pressure. Same thing physiologically.

In diving, the problem is that the excess pressure causes excess nitrogen (N) to dissolve in the blood. This N will come back out of the blood as the pressure is reduced. This should happen slowly to prevent decompression sickness or the bends. But, if the diver rises rapidly, the pressure drops rapidly, and the N comes out of the blood quickly, forming N bubbles in the blood stream. This is similar to popping the top on a soft drink. Here the release of the pressure allows the carbon dioxide (CO2), which was placed into the liquid under pressure, to come out of the liquid and form bubbles. We call this carbonization. A good thing for your soft drink, but not so good for your brain and heart and muscles.

In space decompression basically the same thing happens. Apparently the culprit is water and not N in this situation, however. With the sudden release of pressure, the water in the blood “boils,” becoming a gas, and bubbles form in the system. I should point out that in chemical and physical terms boiling simply means the changing of a liquid to a gas. This can be accomplished by adding heat (boiling water on a stove) or by lowering the ambient pressure (popping open a soft drink). In the case of space decompression it isn’t that the blood gets hot, but rather that the pressure that keeps the water in its liquid state is removed and the water changes to its gaseous state, or boils. Doesn’t sound very pleasant does it?

Though studies on the effects of exposure to a vacuum have been done on chimpanzees, there are no real data on what happens to humans exposed to zero pressure except for a couple of incidents where an astronaut or a pilot was accidentally exposed. Of course, rapid decompression has caused deaths in both high-altitude flights and in June, 1971 when the Russian spacecraft Soyuz 11 suddenly lost pressure, killing the 3 cosmonauts on board, but survivors are few and far between.

On August 16, 1960, parachutist Joe Kittinger ascended to an altitude of 102,800 feet (19.5 miles) in an open gondola in order to set a world record for high-altitude parachute jumping. He lost pressurization in his right glove but proceeded with his ascent and jump. He experienced pain and loss of function in his hand at high altitude but all returned to normal once he descended via chute to lower altitudes.

In 1965 at NASA’s Manned Spacecraft Center near Houston, TX, a trainee suffered a sudden leak in his spacesuit while in a vacuum chamber. He lost consciousness in 14 seconds, but revived after a few seconds as the chamber was immediately re-pressurized. He suffered no ill effects—due to his very brief exposure—but stated that he could feel water boiling on his tongue. This was actually the above mentioned boiling scenario in which water (in this case saliva) becomes a gas on exposure to zero pressure.

A case of partial, prolonged exposure occurred during an EVA (space walk) in April 1991 on the US space shuttle mission STS-37. One astronaut suffered a 1/8 inch puncture in one glove between the thumb and forefinger. He was unaware of it until later when he noticed a painful red mark on his skin in the exposed area. It appeared that the area bled some but that his blood had clotted and sealed the injury.

So, what happens to a human exposed to zero pressure? Since there is no oxygen in such an environment, loss of consciousness occurs in a matter of seconds. Also, if the victim held his breath (don’t do this during scuba diving when coming up from depths either), the air in his lungs would rapidly expand and his lungs could be damaged, bleed, or rupture. Better to open his mouth and exhale the rapidly expanding gas from his lungs.

Water in his blood stream would immediately begin to “boil,” filling the blood stream with water vapor (the gas form of water) and stopping his heart. Bubbles might appear in the blood stream and cause damage to the body’s organs, particularly the brain. As a result, the brain and nerves cease to function. As more and more gas formed within the body, the entire body would swell but it would not explode.

Exposure to heat or cold or radiation might also occur but it will do little harm since the victim would already be dead.

But what if the exposure were brief and the person rescued? Treatment would be to immediately return him to a pressurized environment and give him 100% oxygen. He may survive unharmed or may have brain and nerve damage which could be permanent.

For your scenario, whether he partially decompressed or not, he would be in trouble very quickly. When your victim’s faceplate ruptured he would hopefully begin to exhale air to prevent the expanding gases in his lungs from rupturing them. As air, and thus oxygen, flowed from his lungs and into space, the oxygen content of his blood would rapidly drop and he would lose consciousness in 10 to 20 seconds. He would then die in short order. If he were quickly rescued, he would be returned to the spacecraft, which would be pressurized, and would be given 100% oxygen via a face mask. He could survive intact or with brain damage. It’s your call. Either way works.