Crime and Science Radio: What Bones Can Tell Us: An Interview with Forensic Anthropologist Marilyn London, Saturday 11-1-14, 10 a.m. Pacific 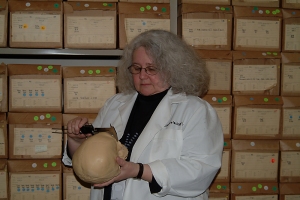 BIO: Marilyn London has worked as a forensic anthropologist for more than three decades. She serves on the U.S. Department of Health and Human Services D-MORT Team, responding to mass fatality incidents including the recovery and identification of remains after the crash of Flight 93 in the 9/11 terrorist attacks. She has worked on the human skeletal collections of the Smithsonian’s National Museum of Natural History and has lectured internationally on the subject of forensic anthropology. She co-edited the book from Smithsonian Press. She is a Fellow of the American Academy of Forensic Sciences, Anthropology Section, and served as Chair of the Section in 2004-2005. Her specialty is the human skeleton and she has taught human osteology and related subjects at several universities. She has analyzed human skeletal remains for medical examiners in New Mexico, Iowa, and Rhode Island. She has worked on a variety of field projects, analyzing human skeletal remains from prehistoric sites and historic cemeteries in New Mexico, Maryland, and New York City. She currently also serves as a Lecturer in the Department of Anthropology at the University of Maryland.

American Board of Forensic http://www.theabfa.org

ABFA advice for students who want to pursue careers in forensic anthropology http://www.theabfa.org/forstudents.html