Q and A: What Drugs Might Cause Side Effects in My Character With Alice in Wonderland Syndrome?

Q: I have a question about Alice in Wonderland Syndrome (AIWS) My character is in his mid-30s. From what I’ve gathered from reading this syndrome, it is fairly common with children and with migraine sufferers and it is controllable. However, I want my character to have side-effects. In other words, even though the AIWS and his migraines are under control, he is increasingly erratic. Insomnia, impotence, and irritability would all be a bonus. Could he be dosing himself with some type of herb that he doesn’t realize would have these side-effects when combined with the medication prescribed for AIWS. Or is there a medication for AIWS that might cause these kind of side-effects but be subtle enough in the beginning that the person becomes mentally unstable before he realizes something is wrong? 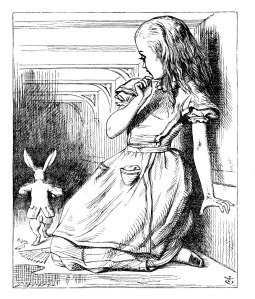 A:    Alice in Wonderland Syndrome is also known as Todd’s Syndrome. It is a neurologic condition that leads to disorientation and visual and size perception disturbances (micropsia and macropsia). This means that their perception of size and distance is distorted. Much like Alice after she descended into the rabbit hole and consumed the food and drink she was offered.

AIWS is associated with migraines, tumors, and some psychoactive drugs. It is treated in a similar fashion to standard migraines with various combinations of anticonvulsants, antidepressants, beta blockers, and calcium channel blockers. Both anticonvulsants (Dilantin, the benzodiazepines such as Valium and Xanax, and others) and antidepressants (the SSRIs like Lexpro and Prozac, the MAOIs like Marplan and Nardil,, and the tricyclic antidepressants like Elavil and Tofranil, and others) have significant psychological side effects. Side effects such as insomnia, irritability, impotence, confusion, disorientation, delusions, hallucinations, and bizarre behaviors of all types–some aggressive and others depressive. Beta blockers can cause fatigue, sleepiness, and impotence. The calcium channel blockers in general have fewer side effects at least on a psychiatric level.
As for herbs almost anything that would cause psychiatric affects could have detrimental outcomes in your character. Cannabis, mushrooms, LSD, ecstasy, and other hallucinogens could easily make his symptoms worse and his behavior unpredictable.

Your sufferer could easily be placed on one of the anticonvulsants, one of the antidepressants, or a combination of two of these drugs and develop almost any of the above side effects, in any degree, and in any combination that you want. This should give you a great deal to work with.

9 responses to “Q and A: What Drugs Might Cause Side Effects in My Character With Alice in Wonderland Syndrome?”