RSS
← Question and Answer: What Happens When Someone Is Hanged?
Guest Blogger: DNA Fingerprinting and Wildlife Forensics →

DNA is one of the most important criminal investigative tools ever discovered. It identifies an individual with virtually 100% certainty. If someone leaves blood, semen, saliva, or some other bodily fluid at a crime scene and if it is found good condition, DNA extracted from the sample can accurately tie that person to the scene. Doesn’t mean he’s guilty just that he left DNA there. Something he’ll need to explain.

But what if there is no suspect? What if the person who left the sample is completely unknown as often happens, particularly with serial predators. These “stranger murders” are often the most difficult ones to solve because there is no apparent “connection” between the murderer and the victim.

This means that any descriptive evidence that can be obtained regarding potential suspects is of paramount importance. If someone witnessed a particular person running in the distance or a particular type of car cruising the neighborhood or a particular type of clothing is left behind, then these can be added to the offender profile and help narrow the search. This is one of the important elements of the Violent Criminal Apprehension Program (VICAP). Through this program violent crimes committed by unknown perpetrators are uploaded into databases. If multiple crimes perpetrated in various parts of the country have similar characteristics then the linkage of these crimes can often build a more firm description of any possible perpetrators.

For example, what if a murder in Florida had certain characteristics (method of murder, weapon used, method of body disposal, etc.) and similar characteristics were found in a murder in New Jersey? What if in Florida someone had seen the perpetrator from a distance and judged him to be a tall thin male while in New Jersey someone saw a black van leaving the scene? If these two crimes were never linked then police in both areas would not know that they were looking for a tall thin male who drove a black van. And so on. The more evidence that can be accumulated regarding serial crimes the better a description of possible perpetrators can be constructed.

Now it seems that hair color can be obtained from DNA. So a perpetrator who leaves behind a drop of blood might also leave behind evidence of his hair color. It seems that red hair and black hair can be determined with an accuracy of approximately 90% while brown and blond hair can be determined approximately 80% of the time. This is critical information in formulating a profile of the killer.

Of course if the killer has changed is or her hair color, this evidence could prove misleading. 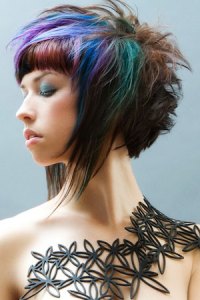 ← Question and Answer: What Happens When Someone Is Hanged?
Guest Blogger: DNA Fingerprinting and Wildlife Forensics →

7 responses to “DNA and Hair Color”