Question and Answer: Could Death From Bleeding Be Delayed For Several Days After a Frontier Wagon Wheel Accident?

This is a question that appeared in my 2003 book Murder and Mayhem.

Q: My story takes place in a wagon train in the late 1800’s. My character is dragged by a horse while crossing a river. He hits rocks and is bounced off the back wheel of a wagon. Of course the horse’s hooves do damage as well. Three days later he dies from massive bleeding from his internal injuries. This three day delay followed by the sudden loss of blood is important to the story’s timing, but is it realistic?

A: The answer to your question is yes.

This type of accident could, as you can imagine, result in all types of injuries. Broken bones, skull fractures, neck fractures, cracked ribs, punctured lungs, and intra-abdominal injuries (injuries inside the abdominal cavity). This last type of injury might serve you well.

A ruptured spleen or lacerated liver or fractured kidney would bleed into the abdominal cavity. Death could be quick or take days if the bleed was slow. There would be great pain, especially with movement or breathing, and the abdomen would swell. Also a bluish, bruise like discoloration could appear around the umbilicus (belly button) and along the flanks. This usually takes 24 to 48 hours or more to appear. This occurs as the blood seeps between the “fascial planes.” The fascia are the tough white tissues that separate muscles from one another. The blood seeps along these divisions and reaches the deeper layers of the skin causing the discoloration. But, these injuries wouldn’t lead to external bleeding since the blood has no exit from the abdominal cavity.

The bowel could bruised and not be ruptured or torn, and a hematoma (blood mass or clot) could form in the bowel wall. As the hematoma expanded it could compromise the blood supply to that section of the bowel. Over a day or two the bowel segment might die. We call this an “ischemic bowel.” Ischemia is a term that means interruption of blood flow to an organ. If the bowel segment dies, bleeding would follow. This could allow a 3 day delay in the appearance of blood.

In your scenario, the injuries would likely be multiple and so abdominal swelling, the discolorations I described, great pain, fevers, chills, even delirium toward the end, and finally bleeding could all occur. Not a pleasant way to die, but I would imagine this happened not infrequently in frontier days.

The victim would be placed in the bed of one of the wagons and comforted as best they could. He might be sponged with water to ease his fevers, offered water or soup, which he would likely vomit, and prayers would be said. They could have tincture of opium (a liquid) available and give him some. This would lessen the pain since it is a narcotic and would also slow the motility (movement) of the bowel and thus lessen the pain and maybe the bleeding.

Of course, during the time period of your story, your characters wouldn’t know any of the internal workings of the injury as I have described. They would only know that he was severely injured and in danger of dying. Some members of the wagon train might have seen similar injuries in the past and might know just how serious the victim’s condition is, but they wouldn’t understand the physiology behind it. They might even believe that after he survived the first two days that he was going to live and then be surprised when he eventually bleed to death. Or they might understand that the bouncing of the wagon over the rough terrain was not only painful but also dangerous for someone in his condition. The train might be halted for the three days he lived or several wagons might stay behind to tend to him while the rest of the column moved on. 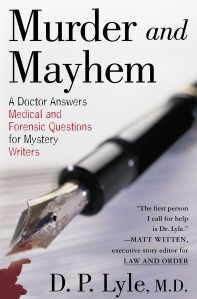 The entire Table of Contents of Murder and Mayhem can be seen HERE.

← The Andromeda Strain Lives
Guest Blogger: 10 Law & Order Plots That Were Shamelessly Ripped From the Headlines →