RSS
← NASA/CSI Event
Mooresville: A Step Back in Time →

I owe a special thanks to my friend and e publishing guru Lee Goldberg for helping me understand the various eBook formats and to Steven Booth at GOS Multimedia for doing the actual formatting. Great job, Steven.

DEVIL’S PLAYGROUND and DOUBLE BLIND, the two books in my Samantha Cody thriller series, have been out of print for a few years but now they’re available as e books. I still have a very few signed First Edition Paperbacks available for those of you who prefer the printed page. 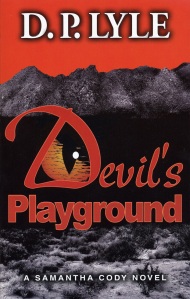 Does Satan have a malevolent Earthly presence?

Deputy Samantha Cody finally bagged her man. The jury’s verdict: Guilty of three counts of murder despite Richard Earl Garrett’s “the devil made me do it” defense. The penalty: A trip to San Quentin’s death row.

But even with Garrett safely locked away, other murders occur, each with Garrett’s signature.

As fear and panic grip the community, Sam struggles to uncover the truth only to find more questions than answers. Does Satan have a malevolent Earthly presence? A face? A name? How could Richard Earl Garrett continue his rampage while locked up? How could he know details of the brutal killings and, more importantly, know what lies in the deepest recesses of her heart? Could she ever defeat a man who appears to possess such unearthly powers? Are her tough-mindedness and professional boxing skills enough to wage war against “the right hand of Satan”? 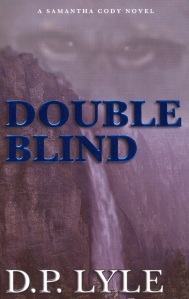 Who, or what, is preying on innocent citizens in the isolated mountain community of Gold Creek, Colorado?

Deputy Samantha Cody has just won her third professional boxing match and expects a relaxing, stress-free visit to her friend Alyss Cameron’s new B and B in the tiny mountain community of Gold Creek, Colorado, Those expectations are immediately dashed when she stumbles onto a brutal killing only to be trampled in a dark alley by the massive killer. Two more murders follow and Sam finds herself in the uncomfortable position of being both witness and investigator.

Police Chief Forrest Wade’s primary suspect, Billy Bear Wingo, a bear-like mountain man, matches the killer’s description, but is he the perpetrator? Is he the shadowy creature that has been seen roaming the mountain slopes, terrorizing hikers, and mutilating cattle or is the truth much more sinister? Does the charming Burt Eagan’s now defunct pharmaceutical research lab, tucked into the deepest recesses of Gold Creek Valley, play a role in any of these bizarre occurrences? Does the stroke-ravaged mind of past Nobel nominee and medical researcher Dr. Edgar Locke hold the answers to these questions?

Sam must survive the harsh mountains, deep hard-rock mines, and a conspiracy of greed and corruption long enough to uncover the truth.

← NASA/CSI Event
Mooresville: A Step Back in Time →