My guest today is B L Lindley Anderson, who works at NASA’s Marshall Space Flight Center in Huntsville, AL. She has worked with writers to help them understand the complex world of space travel, rockets, and all things “out there.” She is available to answer your questions on these topics through her E mail address below.

This article is her opinion and is in no way official NASA information or opinion.

The launch of a space shuttle produces plenty of what we rocket scientists call smoke and fire.  As one of my former supervisors said, lay people are only interested in the front end of a launch vehicle or the rear end.  The front end has the crew and the rear end produces the fireworks.  So the middle section is generally ignored.  NASA personnel who train and interact with crew members are among the people more interested in the front end.  The engineers who design, build and analyze rocket engines are always much more interested in the smoke and fire.  We joke that the crew is “just payload”. 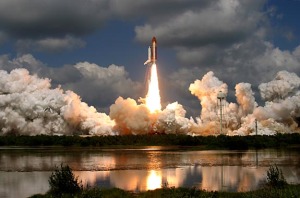 Less interesting to the casual observer are the attitude control engines.  These are the smaller engines that adjust the position of a space craft once it has reached orbit.  They produce much less smoke and fire, and in fact are mostly unseen by the public.  Those lucky enough to receive NASA TV do get to see the shuttle Orbital Maneuvering Engines (OMS) fire, because astronauts are geeky enough to turn the cameras on them when they have opportunity.  Yeah, we geeks on the ground get excited to see it also.

Solid rocket motors produce plenty of interesting by-products, but let’s leave that aside for the moment and focus on liquid engines.  (Solids are motors and liquids are engines, and one can tell a lay person or a new comer by the terminology used.)  The Space Shuttle Main Engines (SSME) use liquid hydrogen and liquid oxygen.  The propellants are cryogenic, that is, super cooled, and so can produce interesting effects, such as freezing lungs if breathed in.  But they are just oxygen and hydrogen and produce water when reacted.

The attitude control engines use less known propellants such as hydrazine with nitric acid, or aniline and hydrogen peroxide (significantly higher concentration than the 5% in your first aid supplies) or unsymmetrical dimethylhydrazine (UDMH) with inhibited red fuming nitric acid, or UDMH with nitrogen tetroxide.  These are not only toxic but corrosive.  Nitrogen tetroxide can be colorless at certain temperatures and inhalation of it can produce extremely serious but delayed effects, for example.  Sniffers must be used by crews on the pad for detection of certain vapors that they should not be breathing.

A true life story about attitude control propellants and the bad things they can do is instructive.  In July 1975 an Apollo spacecraft docked with a Russian Soyuz spacecraft, the first such international docking in the history of the space program.  After separation a few days later, the Apollo craft was executing what should have been a routine re-entry.  A failure in switchology (timing and sequence of throwing particular switches) caused the automatic landing sequencing to not be armed while the reaction control system was active.  Because of this the parachute didn’t deploy automatically on time and had to be deployed manually.  The command module pilot threw the switches to release the apex cover over the Apollo craft and deploy the drogue chutes.  This deployment caused the command module to sway under the chutes and the reaction control system thrusters fired copiously to counteract the movement.  The crew became aware of the situation and fired the automatic system 30 seconds late.  In that 30 second time interval, the space craft became filled with a mixture of unignited monomethylhydrazine and nitrogen tetroxide from the thrusters.  Before drogue deploy, the cabin relief valve opened automatically as customary.  Usually this would draw fresh air into the space craft, but this time it brought in the thruster propellants since the thrusters were located only about 0.6 meters from the relief valve.  By the time the spacecraft landed in the water, one astronaut had lost consciousness and the other two were near to that.  The commander managed to get an oxygen mask on the command module pilot, who came to consciousness shortly after.  The space craft, as usual for Apollo, landed upside down in the water and was righted by inflation of air bags on the top of the craft.  Once the Apollo righted, the vent valve for the cabin was opened and the fumes bled out.  The astronauts were hospitalized for two weeks for chemical-induced pneumonia and edema.  If all three crewmembers had lost consciousness and not been able to access oxygen masks, the outcome would have been tragic.

So these propellants are the sorts of causes that I have steered a couple of writers toward for some serious or fatal injuries.  And it doesn’t have to be a space related story or an injury or death on a launch pad, or in a space craft.  Accidents, unintentional or purposeful, could happen in transport, in processing or manufacturing.  Also some hypergols have uses other than rocket propellant.  A chemical plant accident was the method chosen by one author to make use of the nasty effects of nitrogen tetroxide.  So it doesn’t have to be rocket science to find a useful serious injury or death for your story.