It is my great pleasure to have Katherine back for Part 2 of our interview.

DPL: Welcome to the second round of Writer’s Forensics Blog. Let me start with this: When is a psychological autopsy employed and what can it tell investigators?

KR:  This is one of my favorite activities in forensic investigations, because psychologists get to do a little detective work. In death certifications, there are three important matters: the cause, mechanism, and mode or manner of death. The cause is an instrument or physical agent used to bring about death (gun, knife, poison, rope), the mechanism is the pathological agent that resulted in the death (bleeding, loss of oxygen), and the manner of death, according to the NASH classification, is labeled as natural, an accident, a suicide, or a homicide. However, sometimes the factors for deciding on the manner of death are not clear. Thus, it becomes an “undetermined” death, or if an investigation is still ongoing, it’s “undetermined pending.” (Some death investigators add suicide-by-cop as yet another category, but I think that’s a form of suicide.) A psychological autopsy, which involves an extensive victimology, may assist the coroner or medical examiner in clearing up the mystery about manner of death. Psychological factors, such as the deceased person’s state of mind prior to death (anger, depression, anxiety, fear), can make the difference.

DPL: You have a chapter in your book on Prospective Profiling. What is that and how does it work?

KR:  Generally, behavioral profiling is done after a crime is committed, to read the behavioral clues at a scene. This is retrospective profiling. However, in rare cases, certain categories of offender are so behaviorally consistent that you can actually do a risk analysis for this behavior if a specific person appears to fit the category. Healthcare serial killers, for example, tend to behave in similar ways for similar reasons. However, you have to be careful with this method, because it encourages investigators to think there’s a blueprint for certain offenders and they might then try to measure suspects against it. That’s not a wise approach in most cases. I probably shouldn’t even refer to it as profiling, since it[‘s actually risk or threat assessment, but since it was on the TV series, I discussed it in the book. Too often people think there’s a “profile of a serial killer,” as if we have a distinct pattern a priori that will identify the bad guy, There’s no such thing. This is an idea spun by news media and some crime novelists or film-makers, and it has created a lot of confusion.

DPL: Psychopath, sociopath, or borderline personality disorders? I’ve heard these terms used almost interchangeably. Is there a difference or are they interchangeable?

KR: I hesitate to respond, since they’re all being re-organized and redefined as we speak (not to mention that it would take a lot of time and space to fully address it). The Diagnostic and Statistical Manual of Mental Disorders, which offers the diagnostic criteria used in the U.S., is going through changes for its fifth edition, so I refer people to that site. It’s all there – how we currently diagnose these conditions and how we will probably make changes. The word “sociopath,” is simply a throw-back from earlier decades and it’s not in the manual, but psychopathic type will be in the next one, and the Psychopathy Checklist-Revised is the best diagnostic tool for it. Again, it would take a while to untangle all the conceptual intricacies in the way in which these two labels have crossed paths over the past fifty years, so I’ll pass, or refer readers to my writing on it for the Crime Library, now part of TruTV. By the way, borderline personality disorder should never be used interchangeably with the other two. It’s not that similar, aside from the manipulativeness. Psychopathy is much closer to narcissistic personality disorder, because its care is narcissism.

DPL: Doctors, nurses, and others who work in the healthcare industry are in a unique position to do harm to helpless patients and there are many cases of serial killers within the healthcare profession. What do you believe is the driving force behind these killings? Are these people different from your run-of-the-mill serial killer, if there is such a thing, or are they simply different chapters of the same book?

KR: A healthcare serial killer (HCSK) may be any type of employee in the healthcare system who uses his or her position to murder at least two patients in two separate incidents for self-centered purposes, with the psychological capacity for more killing. (The HCSK generally does kill more than two people.) This makes them like many other serial killers in a basic sense. The offender might be a physician or nurse, male or female, or any of the support staff who work closely with key medical personnel (or even a team). The first comprehensive study of HCSKs indicated that between 1975 and 2005, there were over seventy-five such cases in civilized societies (half in the U.S.), with more suspected and several that cannot be fully investigated. A rare few enter the profession as predatory “angels of death,” because they see the system’s vulnerability, not to mention the patients’. Most transform into killers on the job, sometimes via initially benign motives. Coworkers and potential patients want to know how to spot dangerous nurses before harm is done, but often these killers do not stand out. They may even be exemplary at their jobs, and thus they garner little suspicion.

The available cases indicate that doctors who commit serial murder often kill from the desire to feel a godlike sense of power over patients or from experimental curiosity. They view themselves as superior, and thus their decision to kill is often narcissistic and fueled by their fantasies of power and entitlement. Nurses, on the other hand, often feel put upon and undervalued—especially the males. Their killing sprees appear to have other motives, such as gaining attention, finding a small realm of power in an otherwise powerless world, assuaging depression, paying back an unfair system, and acting out to relieve frustration or workload. A few female HCSKs have been diagnosed with Munchhausen syndrome by proxy, or with severe depression. The occasional HCSK is just someone who feels overburdened and kills patients to ease the workload, and a few have been nurses merely to enrich themselves with life insurance payments or other government subsidies.

DPL: Thanks for being with us. You’ve given us a lot to think about.

If you write crime fiction, I strongly recommend you read The Forensic Psychology of Criminal Minds. It provides a wealth of thought-provoking information. 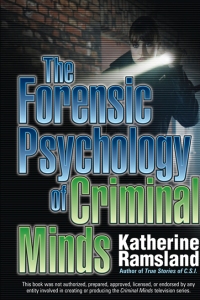 Dr. Katherine Ramsland chairs the Department of Social Sciences at DeSales University in Pennsylvania, where she teaches forensic psychology and graduate-level criminal justice.

4 responses to “Dr. Katherine Ramsland and the Criminal Mind, Part 2”