Fingerprints and the Forensic World (Part 2)

Anthropometry (anthrop means human; metry means to measure) is defined as the study of human body measurements for use in anthropological classification and comparison. Simply put, it is the making of body measurements in order to compare individuals with each other.

In 1882, using anthropometry, French police officer Alphonse Bertillon developed the first truly organized system for identifying individuals. Believing that the size of the human skeleton did not change after about age 20 and that each person’s measurements were unique, he created a system of body measurements that became known as bertillonage. According to Bertillon, the odds of two people having the same “bertillonage measurements” were 286 million to one. 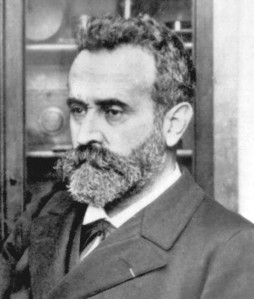 This belief led Bertillon to state that all people could be distinguished from one another by key measurements, such as overall height, seated height from head to seat, length and width of the head, right ear length, left little finger length, and width of the cheeks among others.

His greatest triumph came in February, 1883, when he measured a thief who said his name was Dupont and compared his profile to those of known criminals. He found that Dupont’s measurements matched a man who had been arrested in 1882 under the name of Martin. Under questioning, the thief finally admitted that he was both Martin and Dupont, but that his real name was neither Martin nor Dupont. 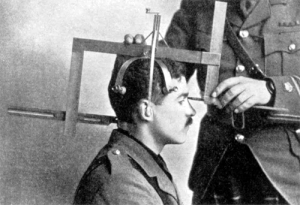 For many years, this system was accepted by many jurisdictions, but by the dawn of the 20th century cracks began to appear. The measurements were inexact and subject to variation, depending upon who made them. Also, since the measurements in two people who were of the same size, weight, and body type varied by fractions of a centimeter, flaws quickly appeared and the system was soon discontinued.

The Will West Case:

Though landmark in its importance, this case was an odd comical coincidence. On May 1, 1903, Will West came to Leavenworth Penitentiary in Kansas. The records clerk apparently thought that the man looked familiar, but the new inmate denied ever having been in the prison before. As part of his intake examination, anthropometry was performed and officials were surprised to find that Will’s measurements exactly matched those of William West, another inmate at Leavenworth. The two men even looked eerily similar.

They were brought together into the same room, but each stated that they were neither brothers nor related in anyway. Fingerprints were then used to distinguish between the two Wills after which Leavenworth dumped anthropometry and switched to a fingerprint-based system for identifying prisoners. New York’s Sing Sing Prison followed a month later.

Was the similarity between Will and William West simply a bizarre coincidence? Not really. A report in The Journal of Police Science and Administration in 1980 revealed that the two were actually identical twins. They possessed many fingerprint similarities, nearly identical ear configurations (unusual in any circumstance except with identical twins), and each of the men wrote letters to the same brother, same five sisters, and same Uncle George. So, even though the brothers denied it, it seemed that they were related after all.

Bertillon reluctantly agreed to add fingerprints to his bertillonage profile. However, he only added those of the right hand, which proved to be a huge mistake.

On August 21, 1911, the Mona Lisa was stolen from the Louvre Museum in Paris. The thief left a clear thumbprint on the glass that protected Da Vinci’s masterpiece. To assist investigators, Alphonse Bertillon added his profiles to the investigation. Unfortunately, he had no classification system to streamline the search through his thousands of data cards, resulting in he and his assistants spending several months digging through his files. They found no matches. Two years later, the police apprehended Vicenzo Perugia and his prints matched the one found at the crime scene.

It turned out that Perigia’s prints were among those in Bertillon’s files all the time. Why no match? The print found at the scene was from Perugia’s left thumb, while Bertillon’s files only contained that of the right. This unmasked yet another flaw in Bertillon’s anthropometric system and led to it falling into disfavor as a means for identification.

← On This Day in History: Edgar Allan Poe
Electronic Noses: Sniffing Out Corpses →

6 responses to “Fingerprints and the Forensic World (Part 2)”