The disclaimer: Tyler Hayes Weinman has not been convicted of anything.

That said, he is, at best, an odd young man and, at worst, a sociopath serial killer in the making. When asked how cats can be captured, he responded, “They have to be either tranquilized or poisoned.” Hmm. Around our house the sound of opener contacting can gets a response every time. From anywhere, asleep or not.

Much more disturbing, he told police that the “tearing sound” made when skin is ripped from a cat’s body is exciting. Really? Wonder how he knows that? At least some cats he had contact with fought back, since he had cat scratches on his arm and back. Part of me, hell most of me, really likes that.

His name is Patrick Tracy Burris. He killed 5 people in South Carolina. He shot a cop in North Carolina. He was a known felon with crimes in at least 5 states. He had just been paroled in April after serving 8 years for felony B&E and larceny and had an outstanding warrant for parole violation hanging over his head. He is dead. Shot by a cop in Gaston County, NC. Folks 50 miles south, down in Gaffney, SC, can now breath a little easier. 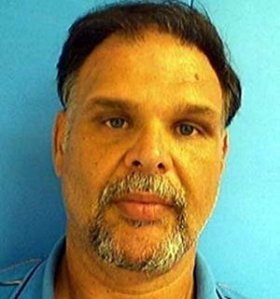 Patrick Tracy Burris. Multiple murderers always get three names. This is avoid confusion with all the law abiding Patrick Burris’ out there.

Apparently the gun Burris was carrying at the time of his death was matched to bullets taken from the other shootings. But the nagging question left unanswered is why? Why did he kill so many people? What was his drive, his motive? As I discussed here earlier, was he a serial killer or a spree killer. I’d bet on the later. From what I read about his history he was an angry man who didn’t play well with others. I’d suspect his rumbling anger at life, the world, himself, whatever drove him to action. We might never know. Hopefully someone will do a psychological autopsy on him and maybe we can gain some understanding.